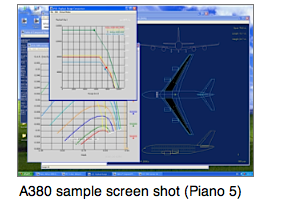 This open release adds four models of the Airbus A380 to the public Piano-X database and can be downloaded freely from the bottom of this page.

• The 'A380-800 (uae)' model is representative of the low-density configurations used by early operators such as Emirates (489 seats). Its typical OEW of almost 300t is associated with luxury fittings that include bars and showers. Reduced reserves reflect the use of detailed flight planning and en-route reclearances.

• The 'A380-800 (569t)' model is a nominal specification for the 555-seat baseline configuration at current expected performance levels. It has a generic OEW of 285t and uses standard international reserves.

• The 'A380-800 (reu)' model is a preliminary estimate of the high-density 840-seat configuration projected for the Air Austral CDG-RUN route. Under mildly favourable assumptions and stage lengths, its seat-mile efficiency is close to the Airbus marketing position of "two litres per passenger per 100 kilometres".

• The 'A380F freighter' is a preliminary estimate of the proposed freighter version.

Each Piano-X model can be adjusted and saved as required by the user. Small differences in NAMs performance between versions reflect different EIS dates. Precise values of OEW (or, in day-to-day operational terms, DOW) can vary significantly between individual aircraft and routes.

Piano-X models constitute the best estimates of Lissys and are not endorsed in any way by the manufacturer or operator. Information from publicly-released Piano-X models can be distributed or published freely provided full credit is given to Piano, but may not be sold or used for purposes of commercial gain or reward. It must not be incorporated in any other software or database without the explicit written permission of Lissys. It may not be used in any carbon calculator, or by ICAO for CAEP ACCS tasks.

If you have used Piano-X before, you can download the latest models from here (zip file). Extract the individual files and drag them into your existing 'pianox-planes' folder, then restart Piano-X. If you are new to Piano-X, you can download everything including this release starting from here.